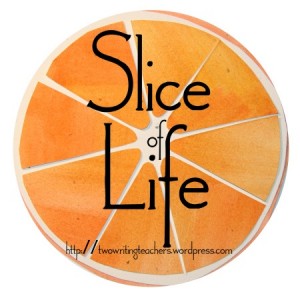 I’m taking part in the weekly Slice of Life Challenge sponsored by  Two Writing Teachers, where teachers write and share each Tuesday. Join in yourself or head over to check out what’s happening with other slicers. If you’re taking part in the SOL, leave a link to your post. I’d love to read it.

Where does music fill the streets and dance across the stages?  Nashville, Tennessee.  And if you travel with a high school orchestra, the weekend will be packed with music.  We loaded up the buses at 7:30 in the morning–instruments in one compartment; suitcases, coolers and breakfast boxes in another compartment; and students and parents with backpacks, blankets and pillows in the seats.

Our first stop was Western Kentucky University, where the orchestra students enjoyed a sight reading workshop with one of the professors from the school of music.  The parents sat back and enjoyed the concert.  We even got a tour of the campus, and learned first hand how the school earned the nickname of Hilltoppers! 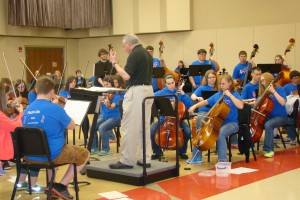 This orchestra can sight read!

Friday night welcomed the Nashville Symphony Orchestra, with special guests The Midtown Men from Jersey Boys.  I may have not lived through the sixties, but I grew up in the eighties listening to the best music from the sixties.  I had to remind myself not to sing along. If I forgot, my daughter generously elbowed me as a reminder. 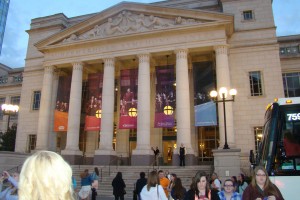 Home of the Nashville Symphony Orchestra

Do you know how an album is recorded?  I learned a little bit about the process when we visited Blackbird Studios where some of the biggest acts in music today have recorded albums.  There are separate rooms to record drums, keyboards, strings, and vocals–and that’s just to get down the basics of the songs.  Extra touches to fill out the music are added later in yet another studio room.  Then the last mixing is done to create the perfect sound in another room before being sent off to create the final master.  Each song is the result of thousands of decisions along the way.  (Sounds a lot like a day in the life of a teacher.)

Some of your favorite artists may have sung into this microphone.

We found even more music aboard the General Jackson showboat.  We cruised up and down the Columbia River while eating a delicious lunch and being entertained by a muscial act that gave tribute to some of the greats in country music (along with a few laughs at their expense). 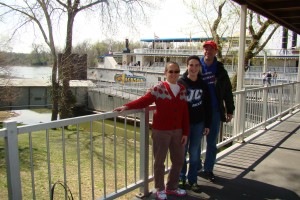 We are ready for toe-tapping music and good eating.

We celebrated Saturday night at the Grand Ole Opry.   Most (well, really all) of the current starts were on Las Vegas for some reason last weekend, so none of them made a surprise appearance on the circle at the center of the stage, but we did get to hear some of the old time greats of country music and bluegrass, including Little Jimmy Dickens, Bill Anderson, and Restless Heart.  My favorite had to be the Willis clan.  Six of the twelve children–all siblings–played bluegrass until the youngest six children (down to age 3) joined them on stage to kick up their heels.  My daughter came home and has been checking the Opry calendar to see when we can go back and catch her favorite members.  During our backstage tour he next day, we even got to stand on the circle on center stage (taken from the stage at Ryman Auditorium where many of country’s greatest stars stood).  Those orchestra members who played violin even got to play a few measures while getting their picture taken. 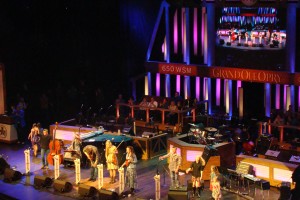 The Willis clan throws down some bluegrass and dancing.

1 Donna Smith at Mainly Write
2 Irene Latham at Live Your Poem
3 Jone MacCulloch, deowriter
4 Liz Steinglass
5 Buffy Silverman
6 Kay McGriff at https://kaymcgriff.edublogs.org/
7 Catherine Flynn at Reading to the Core
8 Tara Smith at Going to Walden
9 Carol Varsalona at Beyond Literacy Link
10 Matt Forrest Esenwine at Radio, Rhythm, and Rhyme
11 Janet Fagel, hosted at Reflections on the Teche
12 Linda Mitchell at A Word Edgewise
13 Kat Apel at Kat Whiskers
14 Margaret at Reflections on the Teche
15 Leigh Anne Eck at A Day in the Life
16 Linda Baie at Teacher Dance
17 Heidi Mordhorst at My Juicy Little Universe
18 Mary Lee Hahn at A Year of Reading
19 Tabatha at Opposite of Indifference
20 Rose Cappelli at Imagine the Possibilities
21 Janice Scully at Salt City Verse
22 Julieanne Harmatz at To Read, To Write, To Be
23 Ruth, thereisnosuchthingasagodforsakentown.blogspot.com
24 Christie Wyman at Wondering and Wandering
25 Amy at The Poem Farm
26 Dani Burtsfield at Doing the Work That Matters
27 Robyn Hood Black at Life on the Deckle Edge
28. Jessica Bigi at TBD
29 Fran Haley at lit bits and pieces
30 Michelle Kogan 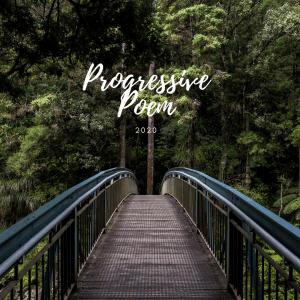